How it all began…

10 years ago, a group of determined Haifa parents decided enough was enough. They were tired of the separation between Jews and Arabs in their city. They wanted to raise their kids together, as equals, in a bilingual, multicultural setting.

The Haifa school, like all of Hand in Hand’s schools, started as a preschool, which served ten families in its first year, and thirty families by its second year. Each year, as the founding grade graduated, the community and school grew. When the first cohort of Haifa preschoolers graduated from kindergarten, the community turned to the municipality and requested an integrated elementary school for their children.

The municipality approved the request, but only as a track within an existing Arab school in the Kababir neighborhood. The Haifa community agreed to the arrangement, and Hand in Hand’s students attended this school for three years. During this time, demand continued to increase, despite the uncertainty brought on by not yet having an independent building—a testament to the school and community’s success.

A growing number of Jewish and Arab families began to see the Hand in Hand Haifa school as an example of what is possible in their city, as in all of Israel: bilingual, egalitarian, multicultural education. Parents saw this school as not only the best education available to their children, but also the most effective path towards a better, more peaceful future. And yet, the school has only been able to open a single class per grade since its inception due to the ongoing lack of space, and has been forced to turn away hundreds of prospective Jewish and Arab families.

Growth in spite of systemic barriers

By 2018, three years after the Hand in Hand school moved into its host school, the building reached full capacity. Once again, the Haifa community turned to the municipality, and requested their own building—where they would be able to expand into several classes per grade, and eventually launch the first integrated secondary school in Haifa.

Instead, the municipality offered an additional host school—a Jewish school by the name of Hofit. The community agreed, and despite losing a number of families due to geographical distance, students have been learning together in this host school for the past three years. Despite less than ideal circumstances, it is still Hand in Hand’s fastest growing school, and has come to be known for its high level of Arabic and Hebrew bilingualism and pedagogical excellence. In the 2021-22 school year, the Haifa school served a total of 271 students, ages pre-K through grade six, in eleven classes.

Now, the Haifa school is once again at a crossroads. The second host school has reached its full physical capacity. There is simply no more room. The Hand in Hand Haifa school principal, Gezeel Jarroush Absawy, does not have an office, and teachers do not have a staffroom.

And yet, there are currently hundreds of families on the waiting list for next year. The school’s first cohort of sixth graders have graduated, and are looking forward to beginning middle school at the Hand in Hand Haifa school next year. As much as we would like to accept every Jewish and Arab child, and launch a secondary school, there is simply not enough space in the current host school. 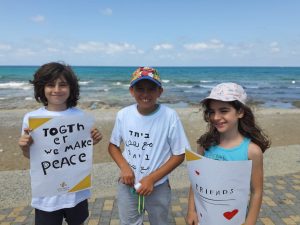 For years, the Haifa municipality has expressed its commitment to providing Hand in Hand with a dedicated building in Haifa, where it could expand to accommodate the growing student body, but this has not yet come to fruition.

“It’s sad, because a school like ours should exist in every city, and particularly in every mixed city. This should be the standard. The fact that there are separate school systems is not normal, and it causes problems. If Jews and Arabs lived together, life here would look completely different—economically, socially, and politically.” —Asaad Joubran, Parent and Co-Chair of the Hand in Hand Haifa Community

We at Hand in Hand are well-versed in the challenges of launching integrated schools in Israel, where 99% of students are tracked into separate schools—Jewish, Arab, and Orthodox. We also know these divisions only deepen the existing rifts in society, and that Jews and Arabs should have the opportunity to live, learn, and grow together. In order to translate our vision into reality, we work together with the Ministry of Education and local municipalities to standardize integrated education, find practical solutions, and bring this type of education to all those who are interested. Ultimately, we hope to see a bilingual school in every mixed city.

While Haifa is arguably Israel’s most integrated city, with a growing number of mixed Arab-Jewish neighborhoods, its education system is still segregated. Hand in Hand’s Haifa school is the single exception to the norm. At the heart of this school and community are real, long-lasting, multidimensional relationships, rooted in mutual understanding and trust.

This community, like all Hand in Hand communities, is the foundation of shared living in this country, and is therefore essential to building a peaceful and resilient society.

“We saw how our community came together and contributed to the city during the events of May 2021. When people in Haifa felt vulnerable and under attack, we brought people together for dialogue sessions, and continued bringing our students to school. We went to the most tense neighborhoods and made our message clear: we represent an alternative. Our very existence helps strengthen this city.” —Meirav Ben Nun, Hand in Hand Haifa founding parent and community leader

Parents and Hand in Hand staff are now working to turn the explicit support of the Haifa Mayor, Municipality, and the Ministry of Education into concrete plans and actions. We are determined to obtain full recognition and an independent, dedicated building in Haifa. We are determined to launch a secondary school, and bring bilingual, multicultural education to as many children as possible. Join us today, and together we can shape the future of integrated education in Haifa and beyond! 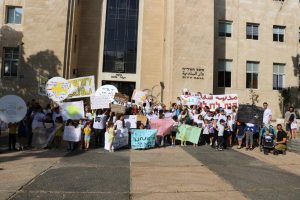