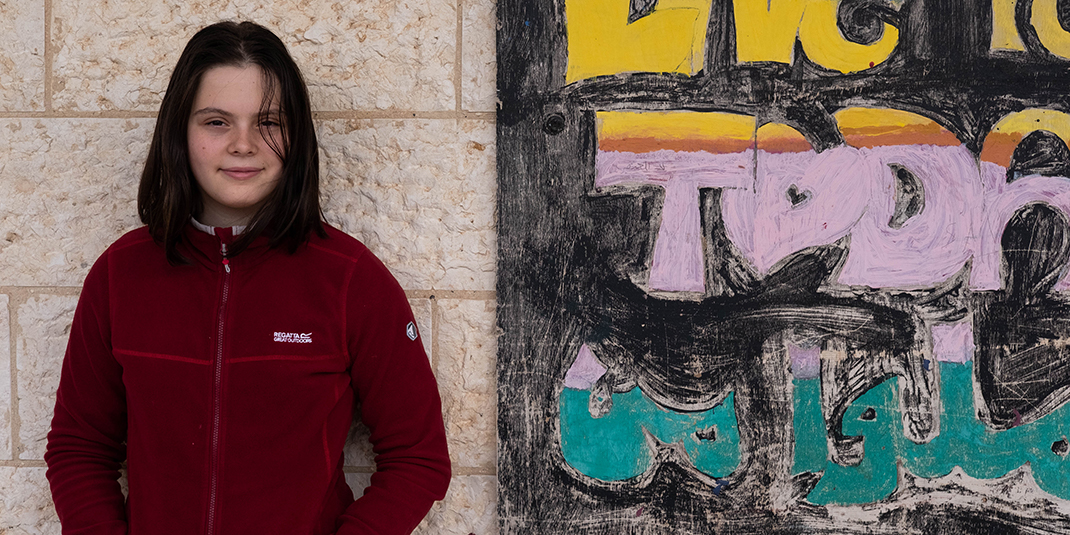 Introduce yourself, where are you from? How long have you been at Hand in Hand?

Hi I’m Rivka, I’m 14 years old, in eighth grade. I’ve been here since first grade so that’s a lot of time being here. And originally my parents chose this school for me, but it was my choice to stay after 6th grade, after elementary school is done.

Why did you decide to stay?

Rivka: I decided to stay because I think in this school I have experiences I couldn’t experience in any other place, like language and culture. I think the school promotes activism, we have space in school to talk about it and the community pushes students to get involved in causes outside of school, which helps me do what I do today in my activism. Also I know Arabic and I know holidays of Christians and Muslims, and I can put myself in someone else’s shoes and understand why they would act a certain way.  I can see things –everyone at this school, students teachers– can see things when they’re complex, not just black and white, always. A lot of people in this country, for example because a Jewish kid goes to a Jewish school or an Arab kid in an Arabic school, someone Jewish might think that Arabs are all bad, and vice versa. But they’ve never met, like actually meeting and having a conversation. And I think because we all grew up together, we don’t even think about how Arabs are bad and Jews are good, because we have the experience of actually interacting with someone that isn’t us. So we can actually have an understanding that you can’t have categories for people.

What causes are you active in?

Rivka: I’m active in the climate crisis, and also fighting for the end of the occupation, specifically what’s happening right now in Issawiya. I think the school pushes you to be active in something you believe in. I got into climate change activism group a few months ago when I suddenly realized that if we keep going on the same track, I will not live until 70, and that gave me the perspective where I suddenly understand I have to fight for my future and all my generation’s future, which is a lot to put on us but we don’t have a choice. When I really started to get into activism in general, it was important for me to fight against the occupation because I realized there are real people who are suffering from this. And with climate change, people right now are suffering and I can’t just leave it. I can’t just let people suffer just because they’re Arabs or different from me.

How does the school support you in your activism?

Rivka: In general, the school has a green group and we try to do what we can in school, like promoting recycling. It’s better to recycle than not doing anything. First we should reduce then reuse then last is recycling, but it’s a step, to start with recycling and see where we can go from there. As a group we go to different things, like a big conference in Tel Aviv, the 4th annual climate conference. We went as a group with teachers, with support from the school. And sometimes I see teachers at protests and they get excited to see me. I really do think they support the things I care about. Of course it’s not easy in any school to be part of activism because you miss school days, but I think our school is one of the schools that supports you more. Like my homeroom teacher, really supports my activism and pushes us to do more. I feel really supported by the school. I think the first thing I did in school a few years ago was regarding the refugee issue in Israel. I was in 6th grade, and the government wanted to take people from the refugee camps and send them back. It was horrible. So I went to protests and I was like, “You know what I want to do? I want to do a petition of kids.” So every recess I sat with a table and chair and talked to students about the issue. I also went to protests and asked kids there to sign the petition, and I got over 200 kids to sign. I really remember a lot of teachers saying things like “Good job! Keep it up!” I think that was my jumpstart. I did that and I just kept doing it.

Do you see a difference in how you think compared to friends and family who don’t go to Hand in Hand?

Rivka: Friends that I know from after-school activities have different perspectives because of me. But I also think it has isolated me from some people, like people who think all Arabs should die, I just can’t be friends with them, sorry. So I stand up when I hear these things. It also makes me closer to people who maybe want to learn more.

What should people know about Hand in Hand?

Rivka: I want people to know we are also a good school, on top of the bilingual aspect. People just focus on the Jews and Arabs learning together, but academically we are a pretty great school too. Also there are really cool things that come with bilingual education, not only talking about conflict and knowing Arabic, but also stuff like activism and friendship.
On another note, in Israel and all over the world, every Friday we protest for climate justice so join us! I’m promoting things that aren’t school but I just wanted to let people know!