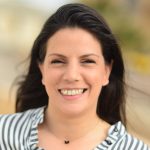 Shada is the Director of the Communities Department at Hand in Hand.

A founding parent of the Kfar Saba “Aleph Beit” school, Shada was appointed community organizer in 2016. That year, her daughter Nai began attending the Kfar Saba preschool, and now attends the elementary school.

Shada was born and raised in Tayibeh, obtained her undergraduate degree in optometry from the Hebrew University of Jerusalem, and is currently completing an MA in public policy at Tel Aviv University. Prior to joining Hand in Hand, she worked as an optometrist, and managed several “Optica” branches over the course of 7 years.

You can read more about Shada’s story here.